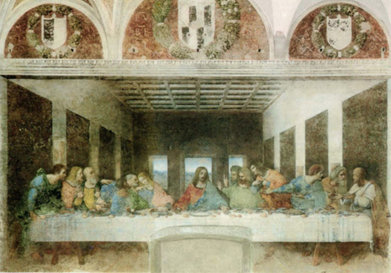 This huge wall painting was to be for the dining room of the Monastery where Leonardo’s patron would come to eat with the Monks.

:Picture of the famous wall painting which shows more of the surrounding wall.

Jesus Christ tells his disciples that this will be his last meal before he will be betrayed by one of his followers, which will lead to his execution.

Leonardo tried to improve on an older technique of Tempera painting by painting on dry plaster rather than the traditional wet plaster. This would allow the painter to not wait as long before adding another layer of paint waiting for the plaster to dry. This in turn allowed for the capturing of the intensity of emotion in the mind of the painter more efficiently rather than him becoming frustrated in waiting for paint to dry.

This painting has musical properties. Click here to read more.

The painting also has an interesting use of ‘Optical viewing’ that you can read about here.

Jesus does not adorn a halo.

Leonardo’s aim was to capture the most poignant moment when Jesus reveals that one of his disciples (Judas) will betray him.

Leonardo took over two years to find the right portrait for Judas, the main star of the painting other than Jesus.

Leonardo found most of his character portraits in the streets of the local Market place.

Unfortunately, a few years later, the dry plaster of the wall painting would begin to crack as it absorbed water.

Painting took 2 years to complete with his Patron believing Leonardo was intentionally delaying the project possibly due to pay issues.

Even though there are glasses containing drinks on the table, there is no chalice that stands out as being synonymous with the tale of the last supper (that was used to drink the blood of Christ and is also known as the Holy Grail).

St Peter is drawn as a feminine figure or more likely a woman. There is a possibility that s/he represents Mary Magdalene (of which the Gnostic Gospels found earlier in our century show her to have been Jesus’ foremost disciple and not the prostitute she was previously thought to be).

When the figure of Mary Magdalene is superimposed to Jesus’ left side, she slots neatly as if lying on his shoulder as ones romantic partner may do. Many believe she was married to Jesus.

The large gap shaped as a ‘V’ on Jesus’s right hand side between himself and the feminine figure is believed by some scholars to denote a symbol of the female and also the missing chalice of the Holy Grail.