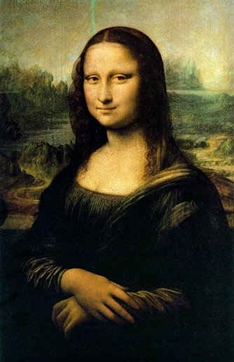 Lisa was a middle class housewife married to a successful Silk-merchant.

She was pregnant at the time of the sitting for the painting.

People tend to note when viewing for the first time that the painting seems smaller than they expect.

Visual effects of the overflowing and unstable scenery behind her and her unusual smile which mesmerizes by confusing the viewer.

The painting employs an optical technique, which makes the viewer believe that the Mona Lisa’s eyes are following them if they move around. When the Mona Lisa is overlapped with the image of Leonardo Da Vinci’s self portrait, there is an absolute similarity especially in relation to their smiles.

No adornments on the figure to denote her social standing.

No wedding ring on a woman with swollen hands, which covers her pregnant stomach.

Leonardo’s Mona Lisa sits behind 3 inches of bulletproof glass in the Louvre. She receives at least 8 million visitors a year, making her the World’s most visited Art attraction!

Though finished, Leonardo added to this painting for the remainder of his life in an almost obsessive manner.

Leonardo did not hand this work to his patron but instead he kept it in all his travels for the remaining 12 years of his life.

This painting is widely recognised as Leonardo’s greatest work and is referred to as his Magnum Opus in the Art world.

All aspects of the painting transcend time, as there are no elements that are subject to fashion in any time period

Some viewers have found it difficult to understand the fascination that people tend to have with the Mona Lisa. It seems that as the painting always has a busy viewing, it is difficult to take a moment to absorb the paintings’ enigma. The few individuals that have been lucky to view the painting privately and especially whom were previously unimpressed have said that they became transfixed by the painting. There seems to be an otherworldly quality to the painting not explained by the cold physics of the painting which grabs the viewer when in a quite viewing.

The Mona Lisa has a distinct splinter mark on its wooden panel on the back.

Surprisingly, in all of the known notebooks, there are no sketches of the Mona Lisa.

King Francis I has the Mona Lisa placed upon the wall of his on-suite bathroom where she will stay for a number of years.

The steam from the baths will cause the small cracks present on the painting.

The painting was then placed in his bedroom.

1789: The French revolution took place. The Royal family were put to death and the Kings palace was turned into a public museum. Leonardo Da Vinci’s Mona Lisa was placed for the first time for public viewing.

1804: When Napoleon declared himself Emperor of France, his first demand was to have the Mona Lisa placed in his private bedroom in Tuileries Palace, Paris. He kept the Mona Lisa for the next 10 years in his bedroom.

1815: After Napoleon had lost his reign as Emperor, the Mona Lisa was moved to the Louvre, Paris. Upon its return, the Mona Lisa became a prominent tourist attraction.

1911, August 21st, early morning: a Florentine stole The Mona Lisa by the name of Vincenzo Peruggia.

1913: Vincenzo Peruggia was caught trying to sell the portrait to painting experts in Florence. Leonardo’s Mona Lisa was then taken on a tour around Italy as a major tourist attraction. However, the French government declared they wanted their national treasure back and so it was moved back to the Louvre, Paris.

We’re fully aware that our readers want to be closer to the Leonardo experience but may feel lost at times amongst the proliferation of Leonardo merchandise out there. We hope to make your life that much easier by providing our recommendations:

If you would like to behold the beauty of Leonardo’s greatest work in absolute detail, and in the comfort of your own living room, we recommend having a framed canvas of Leonardo’s Masterpiece.

Available in Amazon, and at 30 x 20 inches; ‘Canvas Monkey’s’ canvas comes fully framed, ready to placed onto your wall. (We were also amazed to find that it comes with a 75-year ink guarantee!) Just hover your mouse icon over the left picture for the price and link to Amazon.

On the other hand, if you’re on a tighter budget (and we don’t blame you!), we can also recommend the following poster print of the iconic painting that can be placed nicely above your bed, to inspire you to great things every morning. Again by hovering your mouse icon over the picture to the right for the price and link to Amazon.

Other Articles for Mona Liza you can check.