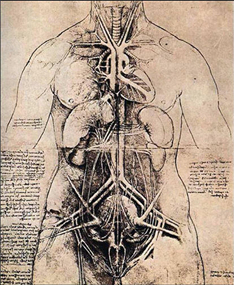 AIM OF THIS PAGE

Links will be added in the future which will provide an even deeper exploration of the subject of anatomy and its relevance to Leonardo.

We should note that any surgery on the dead was a risky path to follow in the time of Leonardo. Dissection was a foul process both in smell and nature with the presence of the Black Death epidemic at the time making it even more risky.

Leonardo however was never fearful of treading down such risky routes in his search for what he considered to lead to the ‘light of truth’.

By trying to grasp the scope of his work in anatomy we can in turn try to understand the workings of Leonardo’s mind a little better. We will also be able to shed more light on his fascinating Vitruvian man drawing which is recognized as a depiction of perfection and of course, the Genius Leonardo Da Vinci!

Leonardo understood that the female played a much larger role in the reproduction of human life than the male, which was not the ideology of the time. Leonardo’s anatomical studies are an expression of his search for the truth and not an allegiance to any dogmatic ideology of the time. He was as always, interested with where the truth would take him and not vice versa.

To illustrate his boundless nature further, Leonardo would compare the anatomy of people with that of animals to see with his own eyes the anatomical differences between them, and not just take it as a given fact. Experiencing the truth through a first hand method was everything to Leonardo. The picture below is an example of this work and principle.

Leonardo recognized his method of anatomy was revealing truths anatomists of the time could not perceive. Before him, most if not all study conducted by anatomists was in writing and not in diagrammatic form.

This was inefficient by Leonardo’s standard that recognized a picture is far more efficient in depicting a finding than writing about it. He also understood that when something is drawn, it is in a sense recreated.

Drawing (and painting) was the only medium at the time that could replicate an item more closely than anything else. (Sculpting involved much too much effort for the same results and could not be easily transported.) The following is a quote on the benefits of drawing anatomy rather than a written description;

‘ . . knowledge that is impossible for ancient or modern writers to convey without an infinitely tedious example and confused prolixity of writing and time.’

Vitruvian man is an example of this principle as it illustrates the Golden ratio that Leonardo had found. It is worth considering for a moment, how much would have been lost in the translation of the equation if Leonardo had just described it instead of having drawn it!

A collaboration was created with an anatomist from the University of Pavia by the name of Marcantonio Della Torre and Leonardo.

The agreement between the two was that Leonardo would provide (at the least) the immaculate Leonardo Da Vinci drawing style of dissections and his colleague would edit and publish the work.

Unfortunately, in the following year, Leonardo’s colleague passed away from catching the Black Death.

This ended the prospect of the work being published but did not diminish Leonardo’s thirst for the intricate knowledge of the human body. He continued his exploration of the human anatomy tirelessly.

FIRST TO DISSECT THE FEMALE BODY

For men of the age, the female body held no particular fascination. For Leonardo, it held many answers for his curiosity. There are many possibilities why Leonardo had an interest in the female form when his peers did not.

He understood that there was much more complexity and upheaval within the female body than within the males’ body. Leonardo’s most recognised work on the female anatomy is called ‘The Great Lady’.

LEONARDO’S SURGERY STUDIES COULD HAVE SAVED MILLIONS OF LIVES!

Of all of Leonardo’s known discoveries, his discovery of the cause of Heart disease through a build up of cholesterol could have saved millions of lives.

This would have been so if his discoveries were ever taken seriously at the time and published by his peers. Leonardo had worked out that a substance carried though the blood and produced by what we eat imbeds itself in the arteries and blocks natural blood flow.

Heart disease due to cholesterol kills multiples of thousands every year. If cholesterol had been recognised by the medical communities of the 15th century, the specific foods that produce and diminish cholesterol would have been worked out and millions of people would now have been saved.

The study of the formation and maturity of the human fetus is a specialized science subject in today’s’ society but was unheard of in the time of Leonardo Da Vinci. Leonardo was the first to study a human fetus and to record his findings. His fearless nature and thirst for natures’ truths guided him into areas that men of his age would not think to venture.

Leonardo is ‘informally’ the father of embryology as his findings were of the embryology were lost before being rediscovered by others in the 20th century.

NOTEBOOKS REVIEWED BY ORDER OF THE POPE.

In 1514, Leonardo was brought in front of the Vatican officials under the most serious allegations of witchcraft and necromancy when his assistant spies provided evidence of these crimes. All of Leonardo’s known notebook pages on anatomy were analysed by the Vatican.

Leonardo’s anatomy studies ceased at this point as he was ordered to stop or face the direst of consequences. It was obviously his Genius and perceived divine gift of painting that avoided him being put to death.

Leonardo was extremely proud of his anatomical studies. He ended his unofficial career of anatomy by writing the following;

‘The 120 chapters composed by me will give judgement in which I have been impeded neither by avarice nor by negligence but only by time. Farewell. ‘ Disturbingly however, he also wrote around the same time, ‘Tell me, have I done anything of worth? Tell me if anything was ever done.’

LEONARDO’S NOTEBOOKS ARE STILL BEING ANALYSED TODAY FOR NEW INVENTIONS AND DISCOVERY!

Leonardo’s anatomy drawings are so perfect in their depiction of the human dissection on a detailed level to this day, that many of his drawings are still being used in scientific illustration.

Any inventions in the myriad of subject fields he ventured into were so far reaching into the future that his notebooks are still being fine-combed for new discoveries.

Scientists are hoping to locate possibilities that have not yet been realized even over 480 years after his death. Scholars who would have not taken him so seriously when he was still alive are venerating Leonardo. The notebooks under inspection include anatomy sketches, which are under the magnifying glass of professional clinical surgeons and scientists.