Da Vinci Invention or Wishful thinking? . . The Shroud of Turin. 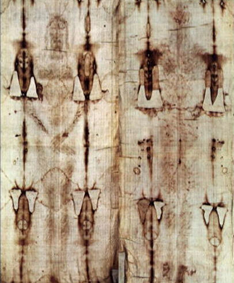 DA VINCI INVENTION OR NOT?

The Shroud of Turin’s ghostly image of Jesus is not a painting (certainty not a traditional Da Vinci Painting). The image on the cloth has been proven to be a hoax and is possibly worthy of being called a Da Vinci Invention.

Is it by coincidence that ghostly figure looks remarkably like a Leonardo Da Vinci image? The shrouds’ ghostly image is believed by a minority of academics to have been created with photographing technology dating from the high Renaissance period.

But are we truly looking at a Leonardo Da Vinci photograph or one of his anatomy experiments? Or is this just wishful thinking on our part?

–That the Greatest Genius of all time has left yet another lasting Legacy which has us all scratching our heads in confusion! We shall ask ourselves, is this a Da Vinci Invention or not . . .

The Shroud of Turin is a cloth made of linen believed once to be the same wrap used to store the deceased body of Jesus Christ. In legend, Jesus was then resurrected and returned himself to heaven.

The cloths’ biblical name is Sindon (derived from Greek) and the production of counterfeit shrouds was a commercial business around the time of Leonardo. There were many shrouds said to be Jesus’ true shroud, all painted and all obviously fake. There was to be reverence for anybody who owned the real shroud and thus powerful families would buy and even commission shrouds to be made for them.

THE APPEARANCE OF JESUS CHRIST

The shroud itself did not disclose a clear image of Christ with the naked eye. The image was revealed the first time somebody photographed its Christly image and the figure revealed itself on the negative of the photograph What now seemed as more proof to confirm that this Shroud belonged to Jesus would later lead to a surge of research that would prove that it was not in fact Christ’s shroud!

Many scholars have accredited the Shroud of Turin as a Da Vinci Invention. His name is linked to the shroud for a number of factors however he is mostly linked to the hoax as being one of the few people in the world who could have had the technical and creative ability to pull it off.

In terms of Leonardo’s personality, hoaxes and illusions suited this renaissance artist well. He was noted as being one who did not fear breaking rules including defying the standing doctrines of the church. Da Vinci’s artwork had been used in a number of illusions before usually as party show pieces for his Patrons to impress distinguished guests. Leonardo was also noted as being a humorous individual and a great showman.

WHY THE SHROUD IS A FAKE

In 1988, the cloth was carbon tested. Three separate institutes proved the cloth material dated from the 12th to the 14th century. Though the cloth is considered to be before Leonardo’s birth, Leonardo would have acquired a cloth considered old to add to the further illusion of its age to convince people that it came from the time of Christ.

There are many other inconsistencies that prove it to be afake. Interestingly however, the proof itself is subject to controversy.

The positioning of the stigmata points on the images’ body (represented by blood stains on the cloth) correspond correctly to how people in Roman times were crucified. A nail was hammered in the wrists and not in the palm of the hands (which is commonly believed).

Anatomically, even doctors in Leonardo’s time did not readily know where the strongest hand point was that it could successfully support the weight of the crucifix victim. Modern anatomists have conducted tests to prove the correct placing of the nails in the wrists.

Da Vinci however would have known this knowledge. Da Vinci’s anatomy knowledge was comprehensive and he would have most likely replicated a crucifixion with a dead body (as he always sort to see ideas in action with his own eyes).

The Vatican church may have however destroyed the corresponding Da Vinci notes containing this knowledge. Leonardo could have also simply left out the knowledge to not be associated with the shroud and to further conceal the fact that it is a remarkable fake. Overall, remaining anonymous was prudent as being found to be a creator of a shroud was a punishable-by-death crime.

It would have been easier for the creator of the shroud to put the stigmata points on the palms of the hands despite his knowledge of the contrary.

People expected the stigmata points on the palms of the hands and not the wrists. What is evident about the creator of the shroud is that this person cared more about the accuracy and quality of the work than its sell-ability to the public or to a patron. These character traits again point to Leonardo.

As a note, the contemporary film, ‘The passion of Christ’ shows the incorrect hammering of nails into the palms of the hand –500 years after the Shroud of Turin shows the correct placing of the nails!

The image of Jesus Christ was not painted but possibly (and innovatively) photographed on to the shroud! This is a theory hotly debated by historians, as there is no clear proof of how the image was actually created. Leonardo could have easily created the shroud by wrapping up a body in his studies of anatomy. He certainly had the access to the bodies, the knowledge and motivation to carry out this hoax. Also, there is certainly is no overwhelming evidence that the Shroud’s image is not the product of photographing technology. Whatever controversy about the methods used, the person in the centre of this hoax is less at debate.

The process of photography had been invented hundreds of years before Leonardo’s’ time but it was a rarity of knowledge. It is possible that Leonardo had reinvented the photographic process as not having access to any established methods of the time. To photograph an image to a piece of cloth would have certainly needed a new and ‘think out of the box’ approach.

Work on photography could have been a desire to move away from painting by Da Vinci. Leonardo painted to earn a living and to fund the continuation of his private scientific studies. He however began to paint much less in the latter part of his life.

One of Da Vinci’s notebooks contains the optical technique behind the Leonardo Da Vinci photograph technology and is labelled as ‘oculus artificialis’ otherwise known as the ‘camera obscura’.

OTE: Click the replicated image below to see clearer what Leonardo drew in his notebook.

THE COMMISSION FOR THE SHROUD
There is evidence of Leonardo receiving a commission that could have been for the Shroud, by a powerful family under the name of the ‘House of Savoy’ in Sardinia, Italy. When Leonardo received the commission for the Shroud he was expected to create an advanced painting on the cloth of linen. However, Leonardo’s method of genius demanded of him to push the frontier of his abilities and so (instead of creating a Da Vinci painting) he instead devised and applied the method of instilling a negative photograph on the shroud that subtly projected an image of Jesus.
Leonardo had previously worked for a member of the House of Savoy by the name of Giuliano de Medici, which he had become friends with. It is believed that Leonardo received the commission in 1492 at the age of 40 to create specifically a Da Vinci painting on the shroud. Upon its completion, the family’s expectations were not met and they instead received an extremely faint ghost figure on the cloth. The virtues and subtly of the work passed them by! There is said to be a record of Leonardo being refused payment for a commission by the family.

LEONARDO DA VINCI IMAGE ON THE CLOTH
The image on the cloth is believed by many to be a Leonardo Da Vinci image. A Leonardo Da Vinci self portrait supports this asevidence. You can view a picture comparison below. What do you think?~ Da Vinci Invention or wishful thinking? ~
:Leonardo Da Vinci photograph study: ‘oculus artificialis’ (artificial eye)

Both the shroud and the Leonardo Da Vinci self portrait later became the property of the House of Savoy, the Medici’s home. This is the final piece of evidence that places Leonardo directly in connection with the Shroud hoax as he had worked for them before.

Overall, it is more than likely that the great Shroud of Turin is indeed a Da Vinci Invention and a spectacular Hoax. Leonardo would have enjoyed leaving a puzzle; one that would remain unsolved long after he had departed this world. He would have also enjoyed the idea that in the long run, advancing technology will solve its mystery in the same way that cutting-edge technology had created it in the first place.